Concerned if your symptoms are COVID-19?

Complete a free screening questionnaire. If it is recommended that you Start a Virtual Visit, please use the promo code COVID19 during the payment portion. A local healthcare provider will look at your responses to guide you to the most appropriate level of care.

Gynecology is the specialty of medicine that deals with women’s healthcare – through the reproductive and menopausal years to post-menopause. It focuses on the female reproductive system, including the uterus, vagina and ovaries. Many issues that gynecology encompasses include:

Gynecology is an important part of health care for women. Because routine gynecological care can help prevent illness and discomfort, lead to early detection of cancers, make pregnancy and childbirth easier, and detect infections and other conditions before they cause serious damage, it is important that a woman sees her gynecologist each year for her annual exam.

A Pap smear or test is performed to test women for cervical cancer. By collecting cells from your cervix, your doctor can run tests to determine if cancer cells are present or not. Early detection increases your chance for curing cervical cancer.

An abnormal Pap smear could indicate a number of things such as an infection, sexually transmitted disease, HPV (Human Papilloma Virus) or even dysplasia, which are abnormal cells that can be pre-cancerous. It is important to remember that these are just indications of what could possibly cause an abnormal Pap smear. Further tests are needed to determine if there is an actual problem or not.

We recommend women begin getting annual Pap smears at the age of 21 or within three years of becoming sexually active.

Infertility is the condition of being unable to conceive a child or bring a pregnancy to full term. Though it is one term, infertility can cover a wide range of causes and conditions, in both the male and female partner. Primary infertility, for example, refers to a couple’s inability to conceive their first child, while secondary infertility refers to an inability to conceive after a pregnancy has already been brought to term. Subfertility is a couple who is having trouble conceiving a child (usually trying unsuccessfully for more than 12 months) but is not biologically incapable of doing so.

Infertility can be caused by conditions in a woman such as endometriosis, fallopian tube damage, uterine fibroids or imbalance of hormones. Infertility in men can be due to a vasectomy, low sperm count and varicocole, a condition in which blood veins near the testicles become swollen and/or twisted. And infertility in either sex can occur due to age, genetic factors or diseases. Still, in roughly 15% of cases of infertility, there is no as-yet-identifiable cause of infertility.

While infertility can be emotionally stressful and damaging, there are medical treatments that can give many couples hope of conception. Infertility treatments usually begin with medication, designed to increase the fertility of either the woman, man or both. Failing that, there are also other procedures, such as in-vitro fertilization, which can attempt to complete the fertilization outside the human body, and artificial insemination, which attempts to complete fertilization inside the body. While the field of infertility treatment grows every day, medical treatments are still an invaluable resource: a little more than half of the couples that seek medical intervention for infertility can expect a successful pregnancy.

Usually occurring between the ages of 45 and 55, menopause is the cessation of the menstrual cycle. This results in the woman’s body producing less estrogen and progesterone, which can produce symptoms such as hot flashes, night sweats, vaginal dryness and eventual osteoporosis. Treatments such as hormone therapy exist for these symptoms, but overall health improvements such as a healthy diet (for post-menopausal women, a diet heavy in green leafy vegetables, soy products, legumes, nuts and seeds, and cold-water fish is usually recommended), weight loss and exercise can go a long way to reducing or eliminating both the symptoms and health risks of menopause. It should also be noted that decrease in sexual desire is not a “normal symptom” of menopause, and should be monitored like any other vital sign.

There are many options for birth control available today, and consulting with a medical professional is the easiest and most efficient way to find out which method is best for you. Choices include contraceptive patches, barrier methods (such as condoms and diaphragms), birth control pills and vaginal rings. While their intention is the same, each method has unique properties and one may be better suited to you than the others. Schedule a consultation with us, and we can help determine what birth control method makes the most sense for your needs and lifestyle.

Endometriosis gets its name from the endometrium, a type of tissue that is commonly found on the inside lining of the uterus. When tissue that resembles the endometrium begins growing in other parts of the abdomen besides the inner lining of the uterus, this condition is referred to as endometriosis. In nearly half the cases of endometriosis, the offending tissue will grow on or around the ovaries. It can, however, occur in many other places, almost always appearing, however, in the pelvic region.

The most common and easily identified symptom of endometriosis is some form of pain. Any occurrence or combination of pelvic pain, painful sex, painful urination or bowel movements, intense menstrual cramping or lower back pain could indicate endometriosis. The amount, type or frequency of pain does not, however, indicate the scale or progression of the condition. Many widespread and advanced stages of endometriosis can produce little or no pain, while other cases of severe pain or cramping can be caused by relatively small occurrences of endometriosis in an early stage. Because of this, it is important to have regular screenings and check-ups, particularly if you experience any painful symptoms as described above.

While its cause is currently unknown, and there is no cure, several treatment options are available for endometriosis that can offer an alleviation or elimination of symptoms and can aid the disease’s regression. Depending on the circumstances, location and progress of the occurrence, endometriosis can help be controlled by a combination of hormone therapy, medication and, in some cases, surgical procedures.

Though there are dozens of types of viruses known as HPV, or Human Papillomavirus, four types are more important to know about than the other, because those four types are, together, responsible for over 70% of cases of cervical cancer and over 90% of genital warts. Our office offers Gardasil®, a convenient and safe vaccination that can help safeguard you against these four types of HPV, significantly decreasing (but not eliminating) your chance of contracting cervical cancer and genital warts. Because other risks for these conditions exist, regular cancer screenings and examinations are still recommended for women who have been vaccinated. For more information on Gardasil®, visit the Gardasil® homepage.

A hysterectomy is a surgical procedure that involves the removal of your uterus, and in some cases one or both ovaries and the fallopian tubes are also removed. Ranked as the most common surgical procedures among women, a hysterectomy is usually performed for those who have gynecological cancer, endometriosis, fibroids, uterine prolapse, constant vaginal bleeding or chronic pelvic pain. Hysterectomies remove the ability to become pregnant so if you think you still might want to conceive in the future, you should discuss any alternative treatments available with your doctor. In some cases, a hysterectomy is the only possible treatment solution.

A hysterectomy is performed as an inpatient procedure under general anesthesia. The surgical procedure lasts from one to two hours, not including the prep time. Your stay in the hospital generally ranges from one to four days. Hysterectomies also require a recovery period that lasts several weeks. You should arrange for help at home if needed.

Hysteroscopies are performed as an outpatient procedure. Do not eat or drink anything after midnight prior to the surgery. Pain medications or general anesthesia may be used to alleviate any pain associated with the procedure so it is important to have someone drive you home from the hospital. Mild to moderate cramping and spotting can be expected. Sexual intercourse should be avoided for at least one week following the procedure. Please schedule a follow-up appointment one week after the surgery. 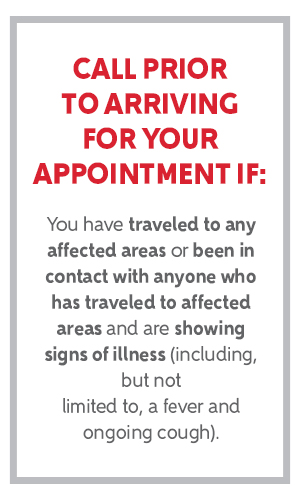 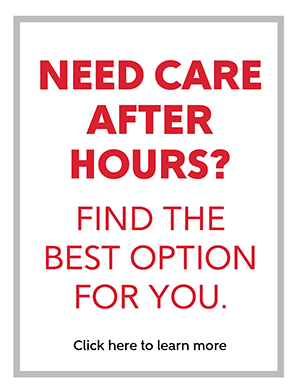